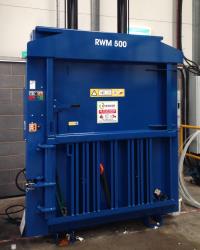 Background Fast-growing flavourings, colourings and contract packaging company Blends UK experienced a ‘light-bulb moment’ about recycling after buying a Riverside Waste Machinery baler. The Liverpool-based family firm, founded in 1998, has turned previously expensive waste disposal into a valuable new revenue stream. It has also saved money and changed staff attitudes. The Challenge The business supplies large bakeries and fish bait firms along with pharmaceutical and chemical companies. In a move to diversify the business it has taken on more staff and recently moved to new purpose-built premises. But with production and turnover increasing, so was its volume of waste materials. Traditionally, Blends disposed of its waste – hard plastics, polythene and cardboard –in skips costing the company around £130 a week. It had no experience in recycling but was mindful that Scottish legislation forcing businesses to separate waste products could eventually be applied in England and therefore decided to take a proactive approach. The Solution After searching the internet, the company identified Riverside’s RWM 550 HD baler as the best machine to compress hard plastics, cardboard and polythene so it took out a three-year fully maintained lease on the machine. Simple and straight forward to operate, it took only two hours to train the Merseyside company’s staff how to use the baler safely and effectively. After installation there were no teething problems at all. Blends UK also buys consumables such as baling twine. The Results The firm believes the investment will save up to £10,000 a year because it can now sell off the waste materials for recycling rather than throwing them away – and having to pay for the privilege. It now recycles 95 percent of all waste, using the industrial waste baler to compress plastic pales into around ten 350kg bales a month. It also produces smaller bales of polythene and cardboard. ‘From the start we could see that Riverside was extremely knowledgeable,’ says operations director Michael Rowark. ‘They were the quickest to respond to our inquiry and their customer service was excellent. The information on the baler and their advice was clearer and better than other companies we sourced. ‘The baler itself scored higher than other machines offering greater productivity. Whenever we invest in anything we always look for a return on investment within a year. We estimate the RWM 550 HD baler will pay for itself in just eight months, which more than meets our criteria. ‘Installing the baler has brought other unexpected advantages – not least a culture change in the business. It has encouraged the workforce to be more creative about the whole question of recycling. ‘It’s got people thinking about what else they can recycle and changed everybody’s mind-set, which is fantastic,’ adds Mr Rowark. ‘The other advantage, of course, is that it’s reduced what we have to send to landfill and that’s important not just for us but also for our customers and suppliers as well. ‘I have no qualms whatsoever in recommending Riverside. In fact, I’ve told one of our own customers about them. It’s important to speak to people who know what they’re talking about and who will supply you exactly the sort of equipment you need.’