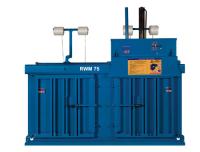 As an award-winning company renowned for its environmental credentials, sustainability and effective waste management are very important to independent retailer GW Proudfoot. Dealing with the business’s packaging waste effectively is therefore a priority and when GW Proudfoot needed to replace its old baling machinery, the retailer turned to Riverside for help.
Background
Founded in 1946, GW Proudfoot is an independent family-run supermarket chain employing 170 staff across its four North Yorkshire stores. The retailer is well known for its commitment to the environment, winning several awards for its energy saving initiatives and for the eco-friendly design of its outlets and headquarters. Recent awards include Best Supermarket at Nisa’s annual exhibition and Independent Retailer of the Year at The Grocer Gold Awards.
The Challenge
GW Proudfoot needed a new baler to handle the large volumes of dry recyclables that its stores generate, as its previous baler had become outdated and inefficient. Each week Proudfoot’s stores produce 50 tonnes of waste cardboard and plastic waste – equivalent to one articulated lorry load.
It was important for GW Proudfoot to have the most efficient waste management machinery possible to support the company’s environmental policies.
The Solution
Derek Armstrong, stores director at GW Proudfoot researched and selected the new baler. He assessed five different options from various suppliers but found that Riverside surpassed the others on price and customer service.
After reviewing GW Proudfoot’s requirements, Riverside recommended the RWM 75 twin baler. Compact and easy to use, the vertical RWM 75 baling press is a cost-effective solution that is able to handle two waste streams at once. It is therefore ideal for small retailers who need to reduce the volume of their cardboard and plastic waste.
The Results
GW Proudfoot has found that the RWM 75 compresses bales much more effectively than its previous waste baler. Importantly, the baler is very easy and safe for employees to operate, making waste management incredibly straightforward.
Commenting on the relationship with Riverside, Derek says: “This is the first time we’ve used Riverside but we wouldn’t hesitate to work with them again because they treated us in such a courteous manner. The new baler is incredibly efficient and the price was very competitive too.”