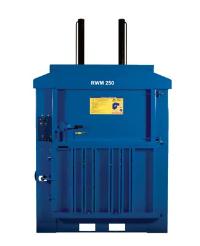 Nestled in the heart of the Cotswolds, Fosseway garden centre is a large, family-owned retail outlet dedicated to outdoor living. Having started out as a farm, the site became home to its first plant tunnel in 1990, and has grown from strength to strength ever since providing the region with high quality bulbs, seeds, shrubs, plants, trees and garden accessories.
Ten years ago a major expansion plan saw Fosseway’s redundant grain store and dryer converted into a shop, giving the garden centre even more retail space for garden furniture, sundries and barbecues.
As the organisation has grown, so too has the volume of packaging waste that Fosseway handles on a weekly basis. Owner director Tim Goodwin explains the decision to invest in waste baling technology…
Background
Committed to being a responsible business, Fosseway strives to buy and sell conscientiously, support local economies and protect the environment. Four years ago Fosseway therefore began investigating the waste machinery marketplace for balingtechnology that could better handle the volume of cardboard, paper and plastic packaging materials  that come into the garden centre.
The Challenge
Disposal costs and skip charges were increasing, and Tim foresaw that this expense was only set to rise. He thoroughly assessed the industry to find a machine that could achieve waste volume reduction and a cost-effective waste management solution.
The marketplace was crowded with a varied array of baling presses, but Fosseway sought an easy-to-use, reliable waste balerthat represented good value for money.
Aware of the overall requirements that Fosseway needed to satisfy when procuring the new technology, Tim spoke to Riverside Waste Machinery managing director Jonathan Oldfield to understand which waste baler would best fit the garden centre’s needs.
The Solution
Working with Tim to understand Fosseway’s specific functionality and capacity needs, Jonathan recommended the RWM 250 waste baler – a durable, easy-to-use vertical baling press with large feed aperture and automatic bale ejection.
The Results
Promptly delivered and installed, the baler was soon a hit with Fosseway. Tim commented: “It was amazing how we reduced the volume of the waste that we were previously loading into a skip at great cost to us.”
Impressed with the performance of this machine, Fosseway purchased a second RWM 250 in July 2012.
Now the garden centre produces two 250kg paper and cardboard bales per week, and one 250kg plastic bale per fortnight. These are taken away respectively by a local lighting company for processing and reuse as packaging, and a plastics recycling company in Hereford.
Tim concludes: “I didn’t view the waste balers in terms of capital expenditure; instead I considered them important assets that would help us achieve cost-savings in the ever-changing waste and recycling arena, whilst enabling us to uphold our commitment to a responsible and environmentally-friendly approach to business.
“We became a repeat client of Riverside’s because not only did the technology ‘do what it said on the tin’, but the customer service was friendly, honest and sustained long after the machinery purchase.
“These two RWM 250s will evolve with the needs of the garden centre and should prove a worthwhile long-term investment for Fosseway.”